Researchers employ countless tests in the search for new and improved engineering materials, from chemical screening to thermal analysis. The goal is to develop as robust an understanding as possible of the thermochemical and mechanical properties of the material in question. Micro hardness testing is fundamental to this process, providing the basis for detailed insights into the dynamic physical properties or functionality of sample materials.

At Clemex, we specialize in advanced image analysis and machine learning. By partnering with industry-leading brands and suppliers of precision cameras, microscopes, and positioning stages, we have successfully leveraged our proprietary software in the micro hardness testing space.

In this article, we will take a look at micro hardness testing in more detail and will outline some of the leading applications of our flexible turnkey systems.

Hardness is a physical quality that represents how well a material withstands friction. It is intrinsically linked to both strength and toughness which are, in turn, determined at the microstructural level. 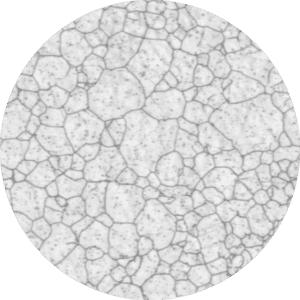 Researchers have been studying the abrasion-resistant properties of materials for centuries, but diamond scratch-testing was first introduced in the early 19th Century. This led to the rise of the Mohs scale, which is still widely used today. As needs and requirements changed, hardness testing became much more sophisticated. Indentation hardness became the new standard, leading to a series of advanced test methods including the Brinell, Vickers, and eventually Rockwell hardness tests.

Micro hardness testing still employs indentation to probe the surface of a sample and measure the resulting impression. The principles vary from test-to-test, but – typically – a sample is placed on a piezo-driven stage and positioned below a diamond-tipped indenter and a calibrated optical microscope with built-in imaging. Once in position, the indenter is pressed into the surface up to a pre-defined load where it dwells for a pre-defined period. Various material characteristics can be extrapolated from the subsequent impression made in the surface. Hardness is not an intrinsic value, however, so tight control of the test parameters and correct application of the right test method is utterly essential.

Though hardness is not an inherent mechanical quality, it is – as mentioned – intrinsically linked to various key physical properties and functionalities. Studies have uncovered a correlation between hardness and grain size in various materials. In ceramics and metal alloys, the orientation and phase composition have also proven to be a critical factor underlying surface hardness.

We can usually characterize micro hardness testing as either an exploration of material characteristics or functionality. This means that micro hardness tests are typically used to either test material hardenability; to confirm process parameters or ability; or to predict other mechanical properties such as wear resistance, toughness, resistance to impact, and tensile strength.

The range of materials that can be assessed via micro hardness testing is always expanding, with advanced indentation systems opening up new avenues into biological hardness testing for tissues and organic polymers. More conventional applications focus on engineering materials, such as metal alloys and technical ceramics. At Clemex, we have employed virtually all major hardness test methods for a wide range of application areas.

If you would like to learn more about the applications of Clemex micro hardness testers, simply contact a member of the team today.